Translated by a now-unknown English-speaking Nazi party member, it was printed by the Franz Eher Verlag in Berlin for the Central Press of the NSDAP in limited numbers during the years 1937 to 1944.

Most copies were distributed to the camp libraries of English-speaking Prisoner of War (POW) camps, and became known as the “Stalag” editions (Stalag being a contraction of the German word Stammlager, or POW camp) because they all carried a camp library rubber stamp on the title page.

Only a handful of copies survived the war, and the text contained in this edition has been taken directly, without amendment, from one of these extremely rare editions.

This official translation is not to be confused with the “James Murphy” or “Ralph Mannheim” translations, both of which were edited, abridged and ultimately unauthorised. The Murphy and Mannheim editions both left out major sections of text, and contained long, clunky, badly-translated and almost unintelligibly long sentences.

In sharp contrast, the only authorised “Stalag” edition contains none of these complicated and unnecessarily confused constructions, and is extremely easy to read, as anyone familiar with the other versions will immediately notice. Most importantly, this only authorised edition contains the full text of the original German—and none of the deliberately-inserted racial pejoratives used in the Murphy and Mannheim versions (words which Hitler never actually used in the original). 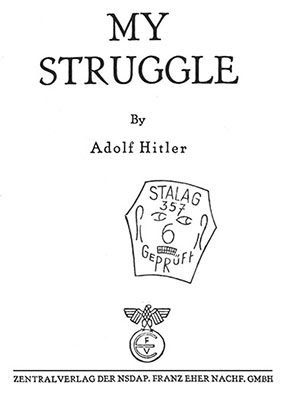 Original title page of a copy of the only official English translation of Mein Kampf ever issued, complete with Stalag camp number 357 stamp.

Stalag 357 was located in Kopernikus, Poland, until September 1944, when it was moved to the old site of the former Stalag XI-D, near the town of Fallingbostel in Lower Saxony, in north-western Germany. Its internees included British air crews, and later, British soldiers captured at the Battle of Arnhem.

About the translator: The name of the translator was never released by the Eher Verlag, and has now been permanently lost to history. An English-speaking party member, his use of British English spelling throughout would indicate that his language instruction either took place in Britain or that his instructors were of British origin, rather than American.

Contrary to postwar propaganda, Mein Kampf does not contain a “plan for world domination” and instead consists of a short autobiography, the effect of the First World War upon Germany, a discussion of race and the Jewish Question, the constitutional and social make-up of a future German state, and the early struggles of the NSDAP up to 1923.

Chapter I: My Home. An autobiographical sketch detailing the writer’s youth, schooling and decision to become an architect.

Chapter II: Learning and Suffering in Vienna. Hitler’s sojourn as a struggling workman and artist in Vienna, where he acquired his first insight into Marxism and the conditions of the Working Class.

Chapter III: Vienna Days—General Reflections. A discussion of the political, social and racial implications of the cosmopolitan nature of the Austro-Hungarian Empire, detailing Hitler’s position on Democracy, the monarchal system, trade-unions and the Leadership principle.

Chapter IV:  Munich. Hitler’s move to Munich and his immersion in German culture and art, ended by his enlistment into the German army at the start of the 1914 war.

Chapter V: The World War. Hitler’s experiences during the war, where he won the Iron Cross for bravery and was wounded several times, ending the conflict in hospital after nearly being blinded by British mustard gas.

Chapter VI: War Propaganda. A discussion on the effectiveness of Allied War propaganda, as compared to the total failure of German propaganda, and the lessons to be learned therefrom.

Chapter VII: The Revolution. An account of the Marxist-led revolution in Germany at the end of the War which led to the collapse of the German state and the hated Treaty of Versailles.

Chapter VIII: The Beginning of My Political Activities. How Hitler was used by the German Army in 1919 to give political lectures for troops recently returned home.

Chapter X: Collapse of the Second Reich. A discussion of the internal ills, social collapse and moral degeneration in Germany which the Marxists exploited in order to bring about the collapse of 1918. Also includes sections of how these problems can be rectified by a properly-ordered state.

Chapter I: Weltanschauung and Party. A discussion of the meaning of the word völkisch, and the underlying philosophy of the NSDAP with regard to the existence of the German peoples.

Chapter II: The State. The future construction of the völkisch state, with regard to systems of government, education, its racial make-up, the need for physical training and military preparedness, employment and career choices.

Chapter III: Citizens and Subjects of the State. A discussion on why race and not nationality must be at the core of citizenship of the German state.

Chapter IV: Personality and the Ideal of the Völkisch State. The natural desire of all life forms to be led, and the demands of leadership which include final responsibility for good and bad decisions.

Chapter V: Weltanschauung and Organisation. The need to demolish the existing order in order to create a new one, and the NSDAP’s ability to definitively define the völkisch philosophy.

Chapter VI: The First Phase of Our Struggle—The Significance of the Spoken Word. The early meetings of the NSDAP, the formulation of its policy and the importance of the spoken word over the written in attracting support.

Chapter VII: The Struggle with the Reds. The violent attacks on the NSDAP by the Communists force the party to create hall-guards to protect their meetings, the creation of the party flag, and the famous “battle of the Hofbräuhaus” in 1921 when an 800-strong Communist mob’s attempt to violently smash the NSDAP was definitively repulsed by less than 50 Brownshirts.

Chapter VIII: The Strong Are Stronger without Allies. A discussion on why political alliances between different parties, based on temporarily converging interests, will always fail.

Chapter IX: Nature and Organisation of the Storm Troop. The self-defence reasons for the creation of the Brownshirts and their organisational structure. Includes the famous “Battle of Coburg” where a violent Communist attack was repulsed in a night-long physical battle.

Chapter X: The Mask of Federalism. How federalism in Germany is used to promote division among Germans, and how it has to be abolished for the sake of unity.

Chapter XI: Propaganda and Organisation. The difference between members and adherents, the secrets of effective political propaganda and the growth of the NSDAP until 1923.

Chapter XII: The Problem of the Trade-Unions. Why a non-Marxist trade-union and an employers’ organisation will be needed in a future völkisch state, and the NSDAP’s attitude towards the trade-unions prior to taking power.

Chapter XIII: The German Policy of Alliances. A discussion on foreign military alliances after 1918, and why Germany should ally itself preferably to Britain, or failing that, Italy, against France.

Chapter XIV: Eastern Bias or Eastern Policy. Why Germany can never be allied to Jewish Communist Russia, and why if Germany should require territory, it must be taken in the East, not the West.

Chapter XV: The Right to Self-Defence. Written against the backdrop of France’s occupation of the Ruhr and the use of Black African troops to occupy the Rhineland, this anti-French chapter demands the right of Germany to militarily resist and defeat that nation.

Epilogue: Author’s Statement on the party in 1926.