I Flew for the Führer

By Heinz Knoke. A fast-paced autobiography of Heinz Knoke, one of Germany’s outstanding Fighter Pilots of World War II. As a contrast to the many accounts of British and American air-war experiences, this first-hand record from the “other side” makes fascinating reading.

The early chapters describe Knoke’s childhood and the first impact of the Nazi regime. Born in Hamelin, he was a policeman’s son and was brought up in the strict Prussian tradition.

At the outbreak of war, he joined the German Air Force, was promoted to Lieutenant, and became Commanding Officer of a Fighter Wing. He logged over 2,000 flights and shot down fifty-two enemy aircraft before being crippled by wounds in an astonishing “last stand” towards the end of the war.

Without doubt Heinz Knoke was an outstandingly brave and skilful fighter. His book reveals his intense patriotism, his discipline, and that sentimentality which is so peculiarly German.

He describes the background of German Air Force life, and the excellent, morale of German airmen up to the time of the gradual disintegration of their air force.

A highlight from his book is his account of a telephone conversation from his bed with Reich-Marshal Herman Giiring on the 22nd March, 1943: Knoke is resting after destroying a United States Flying Fortress by a new bombing technique:—

The Major comes back on the line:

“I am putting you through to the Reich-Marshal.”

This is the shock of my life!

“I am delighted with the initiative you have displayed, I want personally to express to you my particular appreciation.”

And that is that.

So there we have a full-fledged Prussian lieutenant in the German Air Force talking to his Commander-in-Chief while lying in bed wearing nothing but a pyjama jacket. Incredible!

If the great man only knew, I am not even wearing the trousers: the tight elastic irritates me. I cannot help laughing at the thought, as I turn over again.

8: Crippled and The End 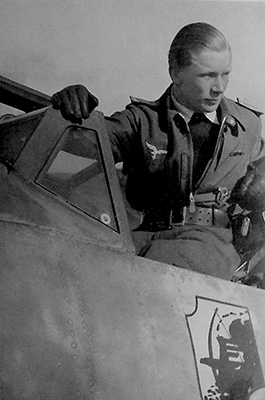